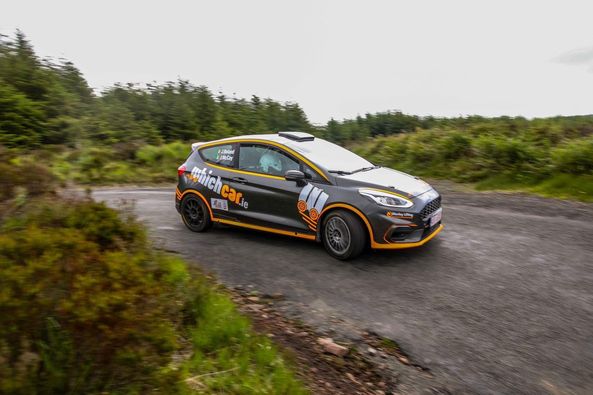 Finally, there seems to light at the end of covid tunnel for our competitive Club Members with a calendar of events for the remainder of the year due to be finalised in the coming days. But while most of us are counting the days until we return, two of our lucky Club Members have managed some competitive action in recent weeks – albeit they had to travel abroad to do so!

James Boland – James headed out to Italy back in April with Co. Driver John McKay to debut his newly acquired M-Sport backed Ford Fiesta Rally 4 on the iconic San Remo Rally. Competing in a class with 35 mostly experienced Italian crews competing on their home event you could have forgiven James for a slow start, but this certainly wasn’t the case as the young Wexford driver posted a time on the 1st stage which was half a second quicker than the eventual class winner! Unfortunately, their Rally would come to a premature end on stage 5 when the crew clipped a wall. The damage to the car was minimal but due to the shortened nature of the event no restart was permitted, and the guys were forced to retire the car. San Remo was a steppingstone for a bigger adventure for James in 2021 as he has announced his intention to contest this year’s Junior British Rally Championship in the Rally 4 Fiesta which will be backed by M-Sport and Whichcar.ie. The 1st Round of the JBRC is the Neil Howard Stages which takes place in on Monday next in Oulton Park Racing Circuit. With a prize of a drive on a World Rally Championship event in a Hyundai i20 N Rally2 on offer for the Junior Championship winner James will be eager to hit the ground running and all of us at Wexford Motor Club would like to wish James and John the very best of luck for the coming season.

Andy Hayes – Andy has established himself as one of the Country’s top Co-Drivers in recent years partnering Josh Moffett to the Triton National Rally Championship in 2019, trusted with compiling gravel notes for WRC regular Craig Breen and also partnered Craig to win the Rali de Mortágua in 2017 along with countless events with some of Irelands top drivers. It was no surprise then when up and coming American Driver Ryan Booth enlisted Andy to partner him for the 2021 ARA North American Rally Championship. Ryan is relatively new to rallying having only taken up the sport in 2019. Prior to that he had a very successful single seater career competing in a number of series such as the American Le Mans Series, Sports Cars, Indycar Lites. The 1st Round was the Sno* Drift Rally which took place in February but unfortunately due to covid travel restrictions Andy was unable to attend and Ryan didn’t have much luck either putting his car off the road and out of the Rally on SS 5.The crew eventually got together for Round 2 the 100 Acre Wood Rally where Andy and Ryan were 2nd fastest R5 Car and 5th Overall on SS1 only for a faulty fuel sensor to put them out of the event on the Road Section between SS1 & 2. Round 3 saw the guys head to Washington for the Olympus Rally to debut their newly acquired Mk2 Fiesta R5 where after setting a string of competitive stage times they finished the event a fantastic 4th Overall and 2nd RC2. No mean feat considering the event was won by the experienced Travis Pastrana with fans favourite Ken Block in 2nd and current Motorsport Ireland Academy Driver Josh McErlean coming home in 3rd.A busy couple of weeks lie ahead for Andy as he renews his partnership with Josh Moffett for an assault on the British Rally Championship which kicks off on Monday in Oulton Park. The guys will certainly be force to be reckoned with and who would bet against them adding the British Rally Championship to the their Triton Crown!!Two weeks later Andy will head back across the Atlantic to Ohio to once again team up wit Ryan to compete in the Southern Ohio Forest Rally where the guys will hope to build on their Olympus Rally result.Andy continues to be a fantastic ambassador for Wexford Motor Club and we would like wish him continued success for the remainder of the year.

Please find attached provisional points after Round 2 of the Suirway Group South East Stages Rally Championship 2016. On behalf of the championship we would like to thank everybody for their support. Driver Standings Rnd2 Navigator Standings Rnd2

Early news from SS5 is that Steve Wood has extended the lead and Stephen McCann is continuing his push, more as we get it.

The cars are now on the way out to the last loop of the day and two cars that look like that won’t be there this evening are Wesley Patterson and Leon Galvin. As of yet we don’t know if it is mechanical or structural, as soon as we find out, we will let you…

***A DATE FOR THE DIARY*** The launch of the Wexford Volkswagen Stages Rally 2016 is on @3pm Saturday 13th of August 2016 in The Riverbank House Hotel. Art Mc Carrik is the presenter on the day and he will interview a wide range of people including: Irish WRC Legend Craig Breen Mayor Of Wexford –…

Steve Wood has extended his lead to 32″ over Ian Barrett who in turn has 23″ to spare over Gary Kiernan. The charging Stephen McCann has posted another quick test time, 2nd fastest on this one with only Wood quicker. Richard Moore is keeping the local flag flying high just after McCann with another local…