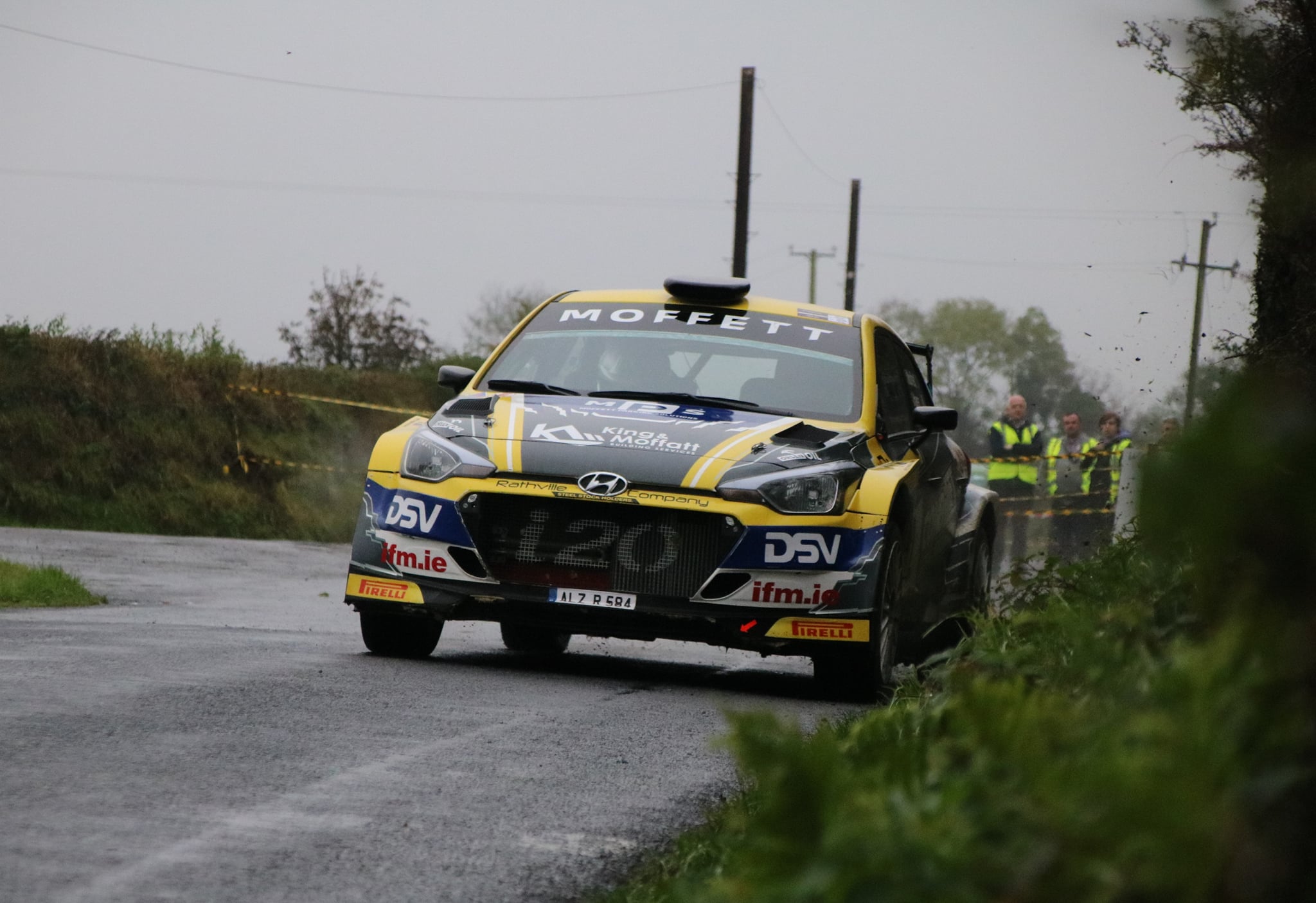 New Ross played host to the 2021 Wexford Volkswagen Stages Rally last weekend and what an entertaining weekend of Motorsport it turned out to be. The competitors started arriving at the Albatros Facility from early on Saturday Morning and headed out to familiarise themselves with the Shakedown and 2 Special Stages which had been set out for them by Clerk of the Course Pat O’ Dowd and his organising Committee in Wexford Motor Club. The Shakedown Stage was a new addition to Rally Events for this year and was introduced to allow the competitors a soft return to competitive action with most having been away from the sport for almost 2 years. It consisted of 4km mini stage that could be traversed up to 3 times and what a success it proved to be. The stage got underway at 2pm and for the next 3 hours Spectators were treated to non-stop action and with the cars arriving in no particular order, no one wanted to leave for fear of missing out on seeing their favourite driver. Most were there to see 2019 Winner James Stafford who had another local man Enda Kennedy on the notes but of course there was also huge interest in a certain young man by the name of Craig Breen who has just signed a 2-year contract with M-Sport and was competing in one of two Historic Spec Subaru Legacy’s that were entered for the event.

Saturday Evening saw the crews make their way to the Dunbrody Centre on the Quay in New Ross for the Ceremonial Start where the huge crowds were treated to a fantastic display of Modern and older generation Rally Cars and were given the opportunity to have a chat and a photo taken with their favourite drivers and see the cars up close. Leo Nulty was on hand to interview the drivers who game him an insight of the cars they were driving and their opinion on the Stages that lay ahead the following day.

Wet conditions greeted the competitors on Saturday Morning as the crews left Parc Ferme for the 1st on 6 Special Stages and with reports coming back that the stages were extremely slippy 2019 winner James Stafford in Car No. 1 decided to allow a couple of the 4-wheel drive competitors sample the conditions 1st, concerned that his Rear-Wheel-drive Darrian might struggle a little in the damp conditions.

Huge crowds had descended on the Stages to witness the battle ahead and it was Welshman Meirion Evans who was quickest out of the blocks on Stage 1 in his VW Polo R5 on Stage 1, just 2.3 sec quicker than Daniel Cronin’s Fiesta R5 with the Hyundai R5 of Josh Moffett with local man Andy Hayes on the notes just 0.3 secs back in 3rd. Craig Breen clocked 4th Fastest in his Subaru Legacy with James Stafford & Enda Kennedy having a cautious start in the Darrian, managing just 10th fastest which left him 20.8 secs off the lead.

Evans was fastest again on Stage 2 and as the crews headed to the 1st Service Halt the Welshman had a 6.7 sec lead over Moffett & Hayes with Daniel Cronin a further 5.6 secs back in 3rd. James Stafford had set 3rd fastest time on SS2 and was now up to 4th ahead of David Kelly in 5th and 3-time Rally winner Steve Wood in 6th. In the Historic Class Craig Breen and Mikie Galvin in their Subaru had a 1:19 lead over the similar spec car of Alan Ring with Gareth Lloyd in 3rd in his BMW E30. Jack Brunton lead the Junior Category by 3.8 secs from Ken Power.

Stage 3 saw Josh Moffett and Andy Hayes set a blistering time of 5:51.2 which saw them move into the lead of the Rally by 5.6 Sec ahead of the Polo R5 of Meirion Evans with Cronin holding 3rd albeit just 7.1 secs ahead of a hard charging James Stafford in 4th. Enda O’ Brien & John Butler were now getting to grips with their VW Polo R5 and were up to 5th ahead of the Fiesta of Steve Wood in 6th.

The roads were now starting to dry out and it was a case of what could have been for James Stafford & Enda Kennedy as the powered the Darrian to fastest time on Stage 4 and had now moved into 3rd Overall but were 37.3 secs behind Rally Leader Josh Moffett who had 13.6 sec advantage over Meirion Evans. Daniel Cronin in 4th was being hunted down by Enda O Brien in 5th and David Kelly in his Fiesta R5 in 6th had a huge battle on his hands with Steve Wood in his WRC Fiesta who was just 1.6 sec behind in 7th.  The Class 14 battle rounded out the Top 10 and was an all MKII Escort affair with Ed O Callaghan in 8th Place just 3.2 secs ahead of Gary Kiernan 9th with the all local crew of Richard Moore and John McGrath a further 9.9 secs back and holding 10th place with 2 Stages to go. Craig Breen continued to have a commanding lead the Historic Class while in the Junior Class a fantastic battle was developing with Jack & Sean Brunton holding a slender 2.3 sec lead over Ken Power & Andrew McCormack.

Spectators gathered in huge numbers for the final 2 Stages as the excitement grew to see who would come out on top and take victory at the 2021 Wexford Volkswagen Stages Rally.

Heading into Stage 6 Josh Moffett and Andy Hayes held a healthy 26.6 sec lead over Merion Evans & Jonathan Jackson and the Rally was about to have a new name on the Trophy. There was still some time for some last-minute drama as 2019 winner James Stafford who was in 3rd place heading into the last Stage carried a bit too much speed into a Junction causing him to spin and damage the rear of his Darrian and in doing so losing about 20 sec.

But as the cars rolled up the end of the last Stage for what had been a fantastic days Rallying it was Josh Moffett and popular Wexford Motor Club Member Andy Hayes who were crowned the winners of the 2021 Wexford Volkswagen Stages Rally. Meirion Evans finished 2nd with Daniel Cronin taking the 3rd step on the podium. Enda O’ Brien & John Butler finished an excellent 4th with James Stafford & Enda Kennedy ending the day in 5th. David Kelly & Dean O Sullivan finished 6th with Gary Kiernan getting the better of his Class 14 counterpart Ed O’ Callaghan in 7th & 8th. Steve Wood ended the day in 9th with the Fiesta R5 of David Condell rounding out the Top 10.

Craig Breen and Mikie Galvin took the win in the Historic Class from Alan Ring & Adrian Deasy with Garth Lloyd & Wyn Thomas 3rd  while in the Junior Class it was Jack & Sean Brunton who came out on top over Ken Power & Andrew McCormack in 2nd and John Michael Kennelly and Eoin Corcoran in 3rd.

Wexford Motor Club would like to express our thanks to our Title Sponsors Wexford VW, The Wexford Local Authorities, The Local Business Community in New Ross, The Residents on the Stages, and the General public for making us feel so welcome, all the Competitors and their Crews for supporting our event and finally to all the Marshalls and Volunteers without whom we would not be in a position to run such a successful event.

We hope to see ye all next year! 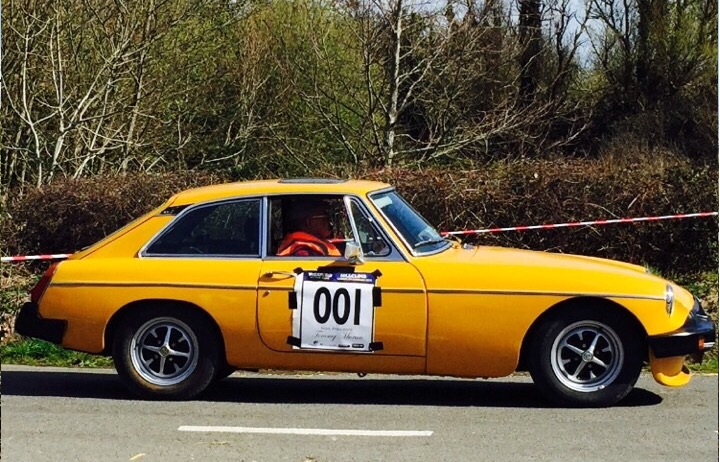 FINAL RESULTS 2015 HILLCLIMB2015 Final Result Wexford April 15 On behalf the committee of Wexford Motorclub we would like to say a special thanks for making the 2015 Hillclimb a great success. It’s a credit to each and everyone involved. Competitors, marshals, spectators, organisers etc. Wonderful achievement and all in Great Spirit. Many thanks

The old saying of there being many a slip between cup and lip is very true. The slip in this instance is the slip that Andrew Purcell had with his car on the last stage of the day, well a spin to be more precise. It turned an 11″ advantage into just over 4″ of…