After two days of hard faught rallying, Mark Straker won the Wexford Stages Rally in association with the Riverbank House Hotel. From the first stage of the rally it was clear two wheel drive cars were going to equal or better there more expensive four wheel drive counterparts. The two Darrians of Straker and local man James Stafford were going to be to the fore straight from the get go. At the end of day one Straker led from Stafford even though Stafford had set fastest times on five of the six stages the one stage that hurt Stafford was stage four where he damaged his suspension. In the true spirit of friendly rallying, Straker gave Stafford the part needed to repair the car even though there was a possibility that this desision could come back to haunt him. Not to let these two away with it, Wesley Patterson, Frank Kelly and George Condell were chasing hard behind the leading two. Included in that chase were Steve Wood, Simon Chapman and Graham Scallan who were the leading four wheel drive competetors. Steve Wood had unfortunately departed the battle on the last stage of day one leaving the top five all two wheel drive cars with only Chapman and Scallan representing the four wheel drive cars in the top ten. Graham Scallans push to get higher in the top ten overnight were being hampered all day by diff problems which meant he could only drive in a wet setting, possibly reducing his speed a tiny bit given the driving conditions.

Day two started with the non running of stage seven which would reduce the number of stages Stafford could chase down the roughly one minute gap between himself and Straker. Stage eight was going to make it look like this was possible, Stafford taking twenty seconds out of the lead in that one stage. Was yesterdays bit of generosity on Strakers part going to haunt him as we thought from the night before, only stage nine would tell. At this time we also noticed on the time screen the missing names of Scallan and Howlett. It transpired that Scallan had suffered a blown engine in which oil had spilt onto the exhaust causing a small engine fire, luckily this fire was soon bought under control but it meant rally over for two local Scallan brothers and the car being dispatched back to Ali Burrows for some much TLC. Howlett on the other hand had broken a steering arm, while making it back to service, his crew were unable to complete a repair capable of sustaining his top ten charge. The quick departure of two local drivers soon became three with the dramatic departure of Stafford on stage nine. His Darrian going off road in by now torrential rain. Such was the force of the crash that the Darrian was by now shortened and it took a few minutes to clear the road to allow the rest of the cars to complete the stage. The local interest in the top ten now fell to John Stafford, James’ cousin. The irony of this situation was that John had James wife Amy as his co driver for the weekend so it looked like that Amy would have the bragging rights in that house on Sunday evening as to who would finish highest. Neil Hickey was now also thrust into the position of keeping the local light alive in the rally. It was now leaving the way clear for Straker to make sure he could get the car home and not crash while in the lead, which is what happened last year. In the battle behind him Wesley Patterson pipped Frank Kelly for second but both drivers glad to finish as high as they did. George Condell finished fourth ahead of Simon Chapman. Eugene Meegan finished sixth ahead of top local driver John Stafford in seventh. Wayne Evans, Andrew Fanning and Richard Moore rounded out the top ten.

Just a quick update, at the end of SS14, the gap has held at roughly 42″, barring a disaster it looks like we have a three time winner in Steve Wood. Can’t seem to see Leon Galvin yet but Richard Moore is set for 5th, leading Wexford driver home. Results we have so far O/A… 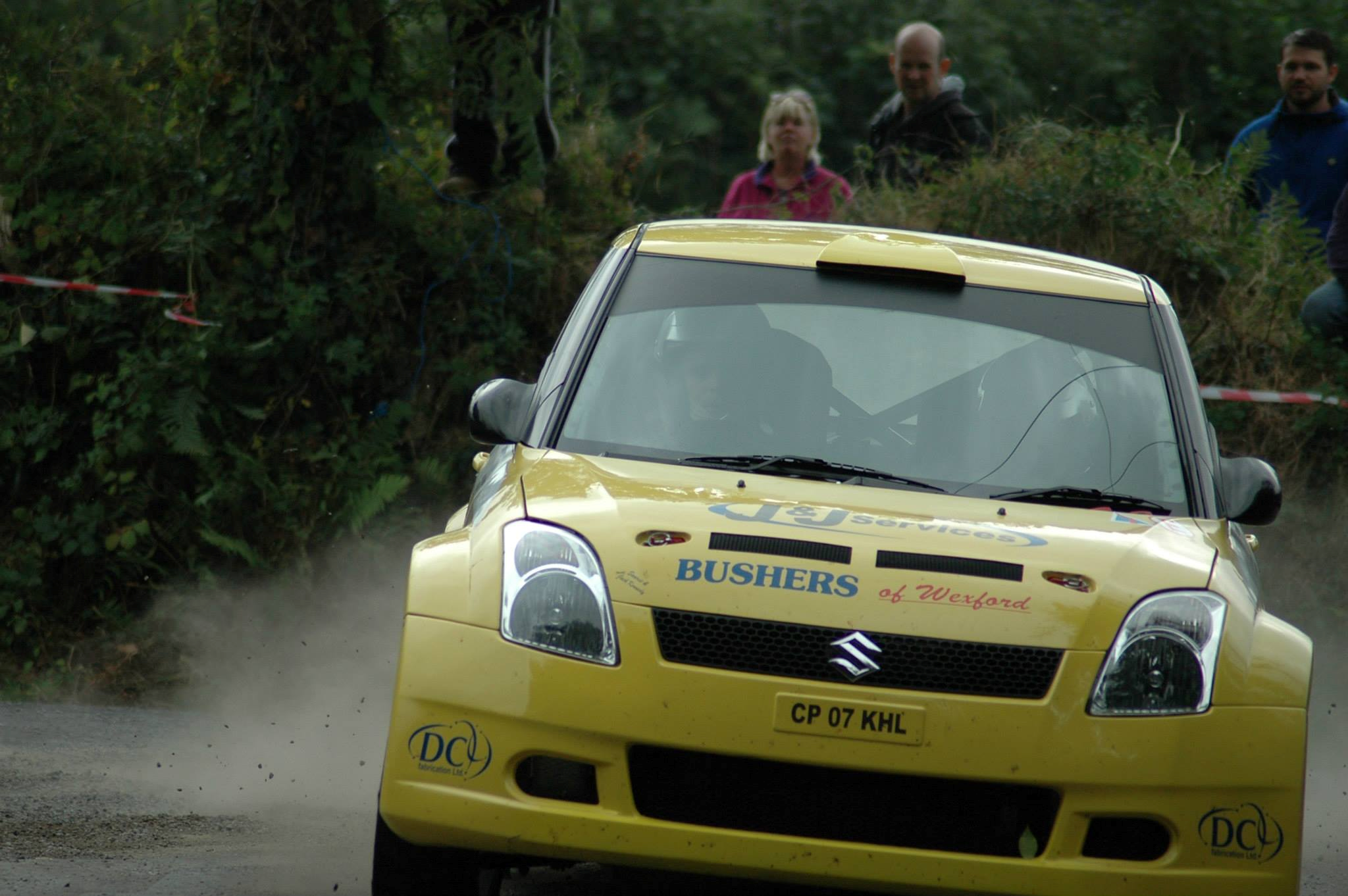 Wexford Motor Club is delighted to announce the running of a Rally Sprint on 4th July 2021.Our first event since July 2019, this event will take place on a 1.6 Km course of 80% tarmac/concrete and 20% loose surface on the site of the old Albatros industrial complex in New Ross. This unique and closed gate…

Using a mixture of what is coming up on our results screen and the live feed from Leo Nulty on the stage, we think it is tied at the top with half the rally done, and half to go. Josh Moffett has done a 5’57” on SS3 , with Meirion Evans posting a 6’03”. Here…

Our one day Sprint will take place on the 9th April  2016 REGS HERE: Wexford-Motorclubs-Sprint-Regs-2016 ENTRY FORM HERE: Wexford-Motorclubs- Sprint-entry-form-2016 Bunclody will play host to the Warm Up round for the Naylor Engineering National Hillclimb & Sprint Championship on 9th April. Located near the village of Clohamon, this hillclimb has all the elements for a…