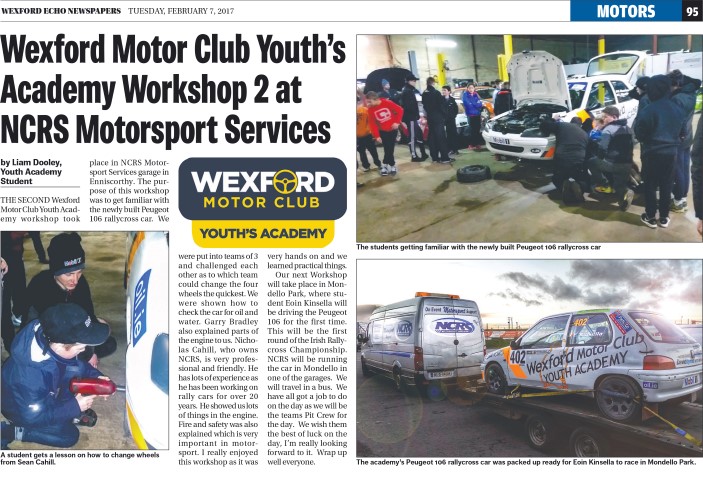 The 7th of January 2017 saw The Wexford Motorclub Youth’s Academy kick back into action.

Report below by Youth Academy Member: Liam Dooley:
I was excited to be going back as it has been a while since we had a workshop there were some people from last year plus some new faces.
Our new sponsor is Mobil 1 who kindly gave us a members pack with beanie hat’s, t-shirt and chargers etc.
This year we are doing Rallycross and Karting.
Lloyd Spendlove was there and gave us a talk about Rallycross and also brought his car for us to look at.
A new member to the Youth Academy got to go for a drive in a 2016 Mc Laren P1 it was so cool and I was so jealous! They went out to R-One karting to collect our discount cards.
This year we are having a race team from mechanics to logistics my job with Dean is commercial crew we will be working with Johnny.
We unveiled two rallycross cars at the academy our first outing is Mondello Park on Sunday Feb 5th
Our next meeting will be in NCRS in Enniscorthy where we will be getting advise and tips on how to run the rallycross car for when we go to Mondello on February the 5th.

Keep the race in its place!
Liam Dooley

The Club recognises that it can be intimidating and challenging for young people who do not have a family background in motorsport to get involved. The aim of the Wexford Motor Club Youth Academy is to reach out to the local Wexford community and facilitate more young people to realise their dreams of partaking in our exciting and rewarding sport.

Commenting on the launch of the Wexford Motor Club Youth Academy, Graham Scallan, Chairman of Wexford Motor Club said, “We are delighted to be able to offer this opportunity to young people living in Wexford to get involved in our sport, and we look forward to welcoming them to our Club.”

He added: “The Youth Academy will be the missing link that will help facilitate getting more young people involved in our sport who may not know how and we can begin nurturing hopefully some more home-grown Wexford motorsport talent of the future.”

After a successful schools programme in 2015 to introduce aspects of motorsport to local schoolchildren, feedback from parents was so positive that the Club began to design a new scheme for budding motorsport enthusiasts that would bring them closer to the action.

Club members have been instrumental in bringing this scheme to fruition, with Club members Garry Bradley, Johnny Looby, John McGrath, among others, working hard to design a scheme that will be rewarding and appropriate for young people.

“This Youth Academy has been very well-coordinated and planned by Garry Bradley and his team,” said Graham Scallan. “They have done a massive amount of work and as a volunteer organisation, it’s wonderful to see the commitment and energy coming from our members for such a worthwhile initiative.”

The Wexford Motor Club Youth Academy is the first launched in Ireland. It will be open to children aged between 8 and 16, and will consist of a number of workshops taking place over 8 months between February and September 2016.

These workshops are designed to provide a safe and enjoyable introduction to motorsport and prepare participants for their first karting event. The course content includes theory and practical aspects, including kart testing. The course will culminate in a competitive karting race held over a weekend in September 2016.

The Wexford Motor Club Youth Academy is supported by Motorsport Ireland with the help of the CRG Kart Ireland Race Team, and is part of a nationwide push to make motorsport more accessible to local communities and allow more people to partake in our fantastic sport.

Wexford Motor Club has been working closely with Art McCarrick, Sport Development Officer, Motorsport Ireland, to produce course content that will be beneficial to any motorsport newcomers, and also leave participants who wish to continue on their race career in a good position to get a first racing licence with Motorsport Ireland.

These are exciting times for Wexford Motor Club and the Youth Academy is part of a wider development plan including a relaunched Club Championship and the inclusion of a number of key guest speakers at Club meetings aimed at improving member’s knowledge of the sport, with safety being a continued priority.

Wexford Motor Club was established in 1971 by a small number of local Wexford motorsport enthusiasts. The Club has grown over the years and now has over 150 members. The Club organises four events each year, including the popular Wexford Stages Rally, and together these events add an impressive €750,000 to the local Wexford economy.

Recognising the value of Wexford Motor Club to the local economy, Wexford Chamber of Commerce, Wexford County Council and Fáilte Ireland are working closely with members to develop the Club further.

The official launch of the new Wexford Motor Club Youth Academy is Saturday 20th February at 10am in The Riverbank House Hotel, Wexford.

All Welcome and it’s free to join! Limited Spaces Available! 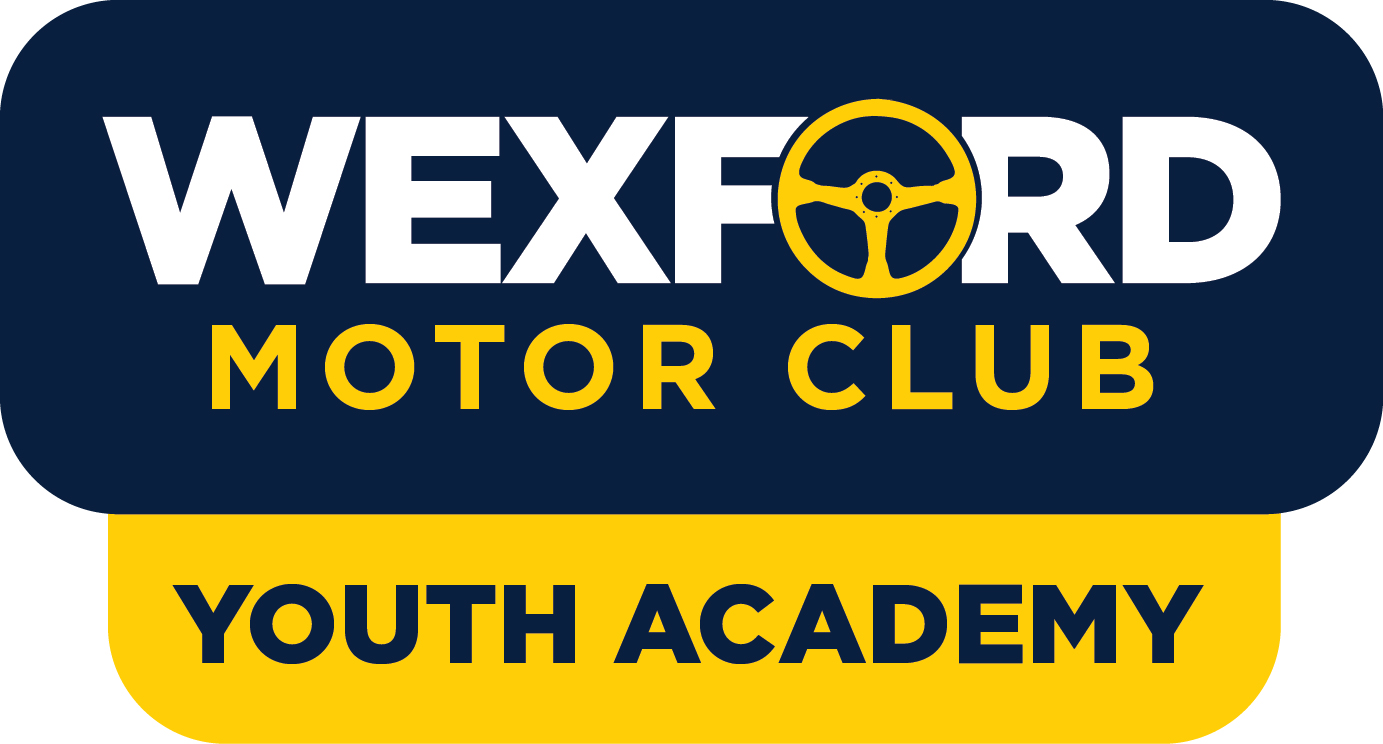